Good Stuff in the Shadows….

A few years ago, I was at World Fantasy Convention in San Jose and met an agency-mate named Jon Sprunk. He had just sold his first book and with some nervousness asked me to read it. Which I did. Shadow’s Son was a wonderful novel and I enjoyed it enough to say so in public. It was a fantasy novel featuring a conflicted young thief with a mysterious companion and reminded me very much of Brent Weeks’s novels and Scott Lynch’s Locke Lamora books. With all the insanity that happened last year, I totally missed seeing the second book in this series, Shadow’s Lure, but I’ve just discovered that the third and final book of the trilogy, Shadow’s Master was just released by Pyr. 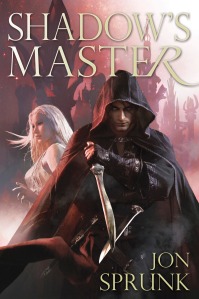 Isn’t that pretty? If it’s anything like the first one, it’ll be a hell of a ride. So if you like thiefy books (and I do) give Jon’s Shadow Saga a try.

Writer, editor, eccentric pain in the tail, bestselling author of the Greywalker novels.
View all posts by Kat Richardson →
This entry was posted in other people's books. Bookmark the permalink.

1 Response to Good Stuff in the Shadows….